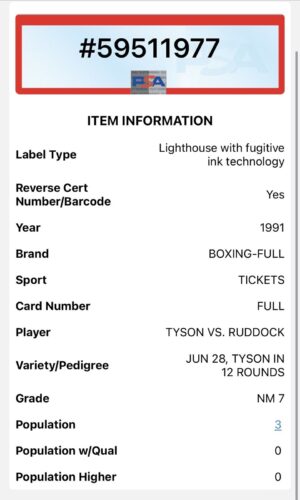 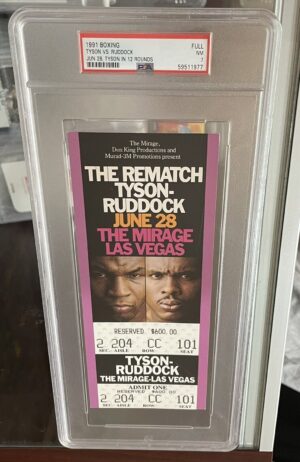 Mike Tyson vs. Donovan Ruddock II FULL-Ticket (PSA) 7 NM-MINT 1991. Only 3 in population and none with a higher grade according to PSA.

Mike Tyson vs. Donovan Ruddock II, billed as The Rematch, was a professional boxing match contested on June 28, 1991. It was the second time the two fighters fought that year, as their first bout in March was mired in controversy.

The fight took place at the same venue the first one had, The Mirage in Paradise, Nevada, USA. As before, it was scheduled for twelve rounds and was a championship elimination fight with the winner becoming the mandatory top challenger for the undisputed world championship that was then held by Evander Holyfield.

Tyson would emerge victorious once again, this time defeating Ruddock by unanimous decision and solidifying his position as the number one contender.