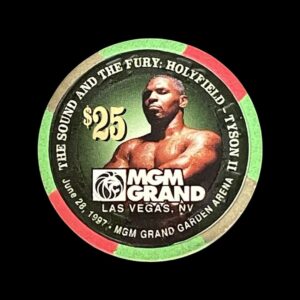 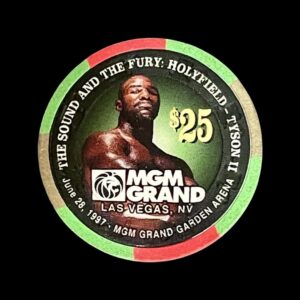 Ultra-Rare and in great condition. Because of the riots after the fight, MGM was forced to close the casino, making these particular casino chips far more scarce…

Blackjack tables were overturned, drinks were spilled and pandemonium flowed around the casinos of Las Vegas, started by the shocking events of the boxing ring where the startled punters had congregated. It was 1997 and Mike Tyson had bitten off a chunk of Evander Holyfield’s ear – he insisted through a blood-stained mouth that it was justice for his rival headbutting him. A world heavyweight championship fight that had attracted celebrities like Madonna to ringside ended in disqualification (and farce) in just the third round. People were not happy. The ensuing melee is now part of folklore. Tyson had an altercation with police officers inside the ring, dispersed boxing fans vented their rage as they left the arena and the casino outside became a warzone. The MGM Grand closed its doors to keep unruly people at bay – it was the first time the famous venue had done so since opening in 1993. Mike Tyson vs Holyfield 2 “The Bite Fight” June 28 1997 MGM Las Vegas Authentic Casino Chip.