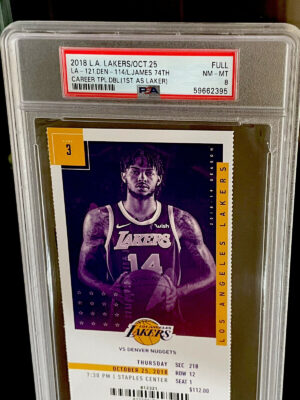 LeBron James first tripple double as a Laker (PSA) 8 NM-MINT Full-Ticket / 2 in Population and only 1 with a higher grade. 74th career triple double.

LOS ANGELES — When Kobe Bryant took a courtside seat in the first quarter, Staples Center buzzed with excitement for the mere sight of the most popular athlete in this building’s history.

The crowd even started a “Kobe! Kobe!” chant in the fourth quarter — and it was immediately drowned out by cheers when LeBron James hit a 3-pointer.

With the symbol of the Los Angeles Lakers’ past watching in approval, James and the Lakers’ young core proved that their present and future is pretty tantalizing, too.

James had 28 points, 11 assists and 11 rebounds while leading a late rally for his first home victory with the Lakers, 128-111 over the previously unbeaten Denver Nuggets on Thursday night.

LeBron and Kobe didn’t get a chance to talk, but the longtime friendly rivals likely both left happy with the Lakers’ new direction after James’ first triple-double for LA.

“Of course I noticed him sitting right on the baseline over there,” James said. “One of the all-time Laker greats. What he’s done for this franchise in his 20-plus years here speaks wonders for me. To be able to compete against him all those years, and for me to be able to share a jersey, the same jersey as him at this point, is pretty special.” 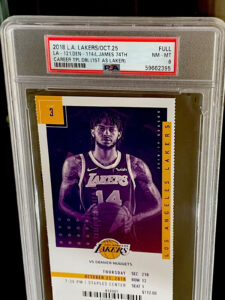