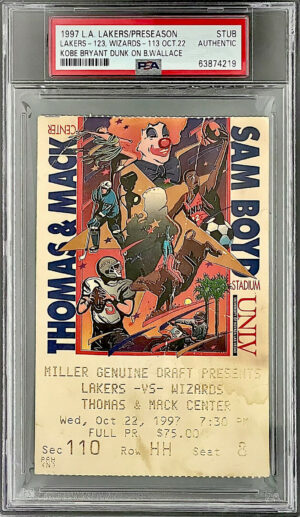 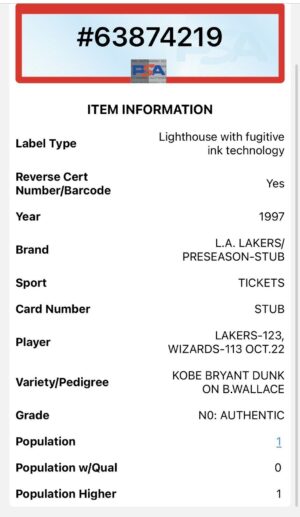 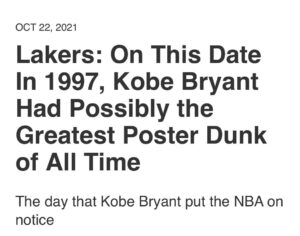 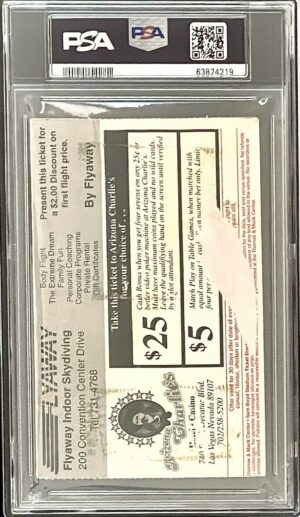 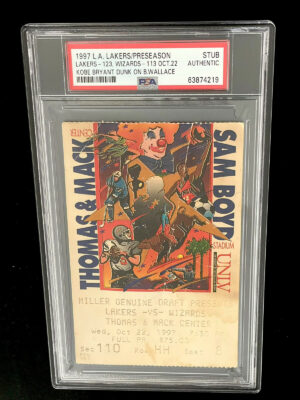 Kobe Bryant Iconic Dunk that Posterized Ben Wallace (PSA) Lakers 1997 Pre-Season in Las Vegas. The ticket has wear and tear including stains and creases and seen in the photos.

Ultra-Rare Only 2 in population according to PSA.

Kobe Bryant Had Possibly the Greatest Poster Dunk of All Time, And officially put the NBA on notice!

The scene was a Lakers preseason game against the Washington Bullets. A young Mamba, Bryant was in an iso situation against the Bullets’ Jimmy Oliver. Bryant’s finish is understandably the most memorable part of the play, but his crossover is what gave Bryant the step past Oliver. It is one of the filthiest crossovers I have still ever seen. After he crossed Oliver’s ghost out of his body, Bryant dribbles into the paint and jumped for the dunk. In the clip, it looks like Bryant has jumped way too early to throw down a dunk. It wasn’t. Bryant posterized Ben Wallace in such a manner that Wallace’s HOF career started because this was the moment he was baptized.

The Lakers’ bench reaction says it all. They are in disbelief. Nick Van Exel’s look of amazement gets me every time. For his part, Van Exel knew this was Bryant’s announcement to the league.

“At that time it kind of caught everybody off guard because it was basically a one-on-one situation. Everybody was watching those two and we didn’t know what he was going to do, and when he finished the play (which was dunking the ball through the basket, not trying to dunk it and the ball going in the stands) he really finished the play, and that sort of let everybody know that here’s a guy who’s going to be special in this league for a long time to come.” According to Sports Illustrated.