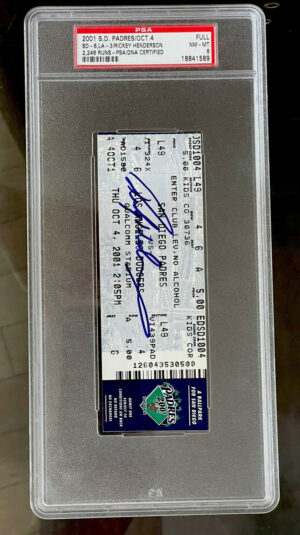 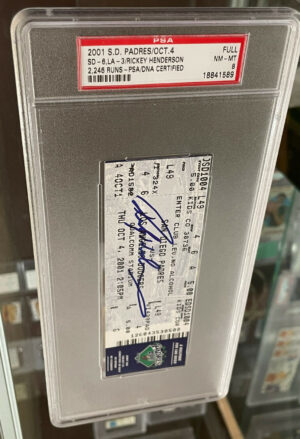 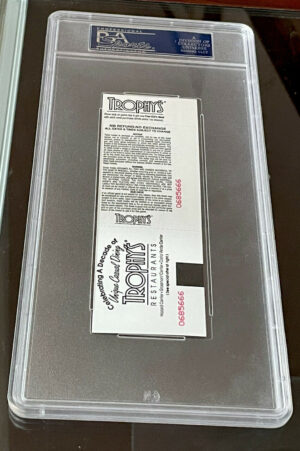 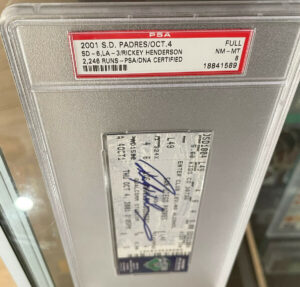 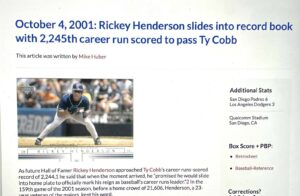 s future Hall of Famer Rickey Henderson approached Ty Cobb’s career runs-scored record of 2,244,1 he said that when the moment arrived, he “promised he would slide into home plate to officially mark his reign as baseball’s career runs leader.”2 In the 159th game of the 2001 season, before a home crowd of 21,606, Henderson, a 23-year veteran of the majors, kept his word.

The fourth-place San Diego Padres were playing the final game of a three-game series against the visiting Los Angeles Dodgers. The LA squad was stuck in third place, but they were seven games ahead of the Padres. San Diego had lost five of its last six games, guaranteeing that the Padres would not have a winning season. (They came into the game with a record of 77-81.) Rookie right-hander Jason Middlebrook got the nod as starting pitcher for the home team. He was making his third start and fourth appearance in the majors since joining the Padres in mid-September. Middlebrook was opposed by Dodgers righty Luke Prokopec, who entered the contest with a record of 8-6 and an ERA of 4.86. The 166-pound Prokopec had been working out of the bullpen; his last start was on August 25 against Atlanta.

Middlebrook was a bit shaky from the get-go, walking both Tom Goodwin and Gary Sheffield in the top of the first, but he escaped without allowing any runs. Prokopec was not so fortunate. Henderson and D’Angelo Jimenez each flied out to open the bottom half of the opening frame, but Ryan Klesko stroked an 0-and-2 pitch down the right-field line for a double. Prokopec got two quick strikes on cleanup batter Phil Nevin as well, before Nevin lined an RBI single to right, giving the Padres a 1-0 lead.

Both teams were retired in order in the second, but the Dodgers scored in the top of the third. With Goodwin on first, Shawn Green doubled to deep center, plating Goodwin. Sheffield followed with a single up the middle, and Green was waved home but was called out on a close play at the plate. That brought up Henderson’s historic moment.

With one out in the bottom of the third, Henderson settled into the batter’s box. After pitching ball one, Prokopec tried to get a 93-mph fastball past Henderson, but failed. Henderson swung and launched the ball off the top of the left-field fence. It was his 2,998th career hit, his eighth homer of the season, and when he crossed home plate with his 2,246th career run scored, the record was his. As he rounded the bases, “fireworks erupted from beyond the right-field stands, [and] the instrumental theme from ‘The Natural’ was blasted over the stadium loudspeakers.”3 And then Rickey slid into home plate.

Teammate Tony Gwynn described the scene: “And he comes sliding into home plate, and the guys loved it. They were all over him. To me, that’s what the game is all about.”5 Henderson could not take home plate out of the ground, so Gwynn presented the new leader with a gilded home plate that had a plaque commemorating the milestone. Henderson held that over his head instead.

Prokopec must have been a bit rattled by all of the fanfare and delay. He worked a full count to Jimenez before getting him to fly out and then walked both Klesko and Nevin. Bubba Trammell also had a full count (which took nine pitches) but grounded to short to end the mini-rally. Henderson’s homer had given San Diego the lead for good.

The Padres padded the lead in the fourth on a two-out double by Damian Jackson and an RBI single by Middlebrook. Two innings later, they struck again. Mike Trombley came in to pitch for the Dodgers, replacing Prokopec. Trammell sent his first pitch through the hole in short for a single. After two fly outs, Jackson singled, and Gwynn pinch-hit for Middlebrook. The future Hall of Famer worked a full count before drawing a walk to load the bases (and Kevin Witt came on to pinch-run for Gwynn). That brought Henderson to the plate, and he drew another walk, bringing in a run. Jimenez drove a liner into right for a double, and Jackson and Witt scored. The Padres now led 6-1. Klesko walked, again loading the bases, but Trombley struck out Nevin to end the inning.

In the eighth, three singles by McKay Christensen, Goodwin, and Bruce Aven resulted in a Dodgers tally, and then in the ninth Los Angeles threatened again. Jeremy Fikac had entered the game in the eighth as the fourth Padres hurler, and he started the ninth by retiring two of the three batters he faced, sandwiching groundouts around a single by Adrian Beltre. San Diego skipper Bruce Bochy made the call to the bullpen for Jose Nunez. Dodgers manager Jim Tracy countered by sending in Phil Hiatt to bat for Dave Hansen. Hiatt took the first pitch for a ball and then smacked a double into right field. Beltre circled the bases and scored, pulling the Dodgers within three runs. Bochy called for Trevor Hoffman to save the game. It took four pitches for Hoffman to strike out pinch-hitter Marquis Grissom to end the game. Henderson’s record had come in a San Diego victory, 6-3.

Henderson, the new runs-scored king, had gone 1-for-4 with a walk and a pair of runs batted in, and after the game he admitted, “Scoring so many runs, it’s not just an individual record. It’s a record that you’ve got to have your teammates help you out.”6 He added, “When I first started in the big leagues, I felt that as the leadoff hitter my job was to get on the basepaths, create stuff and score some runs to help my teammates win some ballgames. It just so happens that over the 23 years I think I went out there and did my job as well as I could do … and all of a sudden it’s a record breaker … it’s just an honor.”7

The Hall of Fame asked Henderson for his spikes to put on display in Cooperstown.8 Henderson said he wanted the actual home plate.

In earning the victory, Middlebrook equaled the longest outing of his career – six innings. He scattered five hits and two walks, allowing only the one earned run. San Diego saves guru Hoffman picked up his 43rd save.9 Prokopec took the loss.

In addition to owning the career runs-scored record (2,295), Rickey Henderson holds the stolen-base record (1,406), the unintentional-walks record (2,129)10 and the leadoff home-run record (81). Coincidentally, only hours after Henderson set his record, San Francisco’s Barry Bonds blasted a 454-foot home run into the upper right-center-field bleachers at Houston’s Enron Field,11 giving him 70 homers for the season and tying Mark McGwire’s single-season record. But on this day, San Diego was celebrating Henderson’s accomplishment.