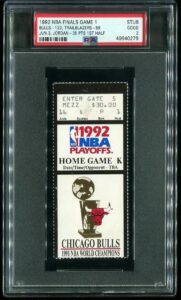 The infamous shrug happened on June 3rd, 1992, the first game of the series and the game that gave Jordan a record of three-point shots made of the season His rat-a-tat-tat firing of six 3-pointers against the Trail Blazers in the 1992 NBA Finals led to “The Shrug,” one of the best reactions in NBA history.

Jordan came out firing in Game 1, Chicago Stadium was buzzing by his fourth 3-pointer and nearly exploded after his fifth. Then came the sixth. Guarded by Cliff Robinson, Jordan let it fly. When the ball swished, his first reaction wasn’t a shrug, but instead a taunting shake of the head — no, no, no — in Robinson’s direction. The Shrug. As in: “What in the hell did I just do?” or “What can I say?” The Shrug happened when Jordan glanced courtside at Magic Johnson, then an NBC commentator, and it became iconic.

His six three-pointers were a Finals record for a half, same for his 35 points!