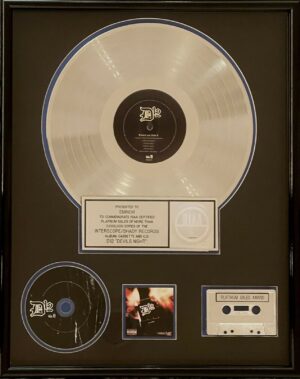 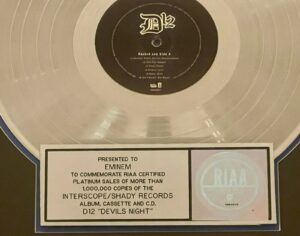 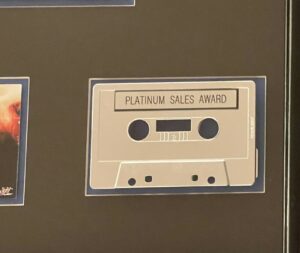 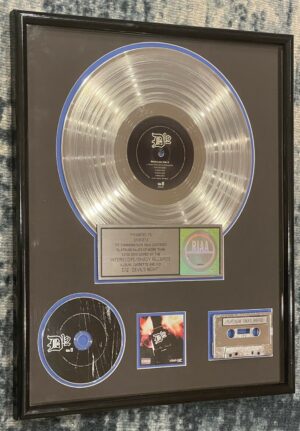 Platinum Record and Plaque along with RIAA insignia. Eminem record awards are rare AND VERY RARELY DO YOU SEE ONE PRESENTED TO Eminem himself!

D12’s debut album Devil’s Night was released in 2001. The album reached the number one spot on the Billboard 200 and reached the top spot on various charts internationally. The album received a platinum certification from the RIAA and sold almost two million copies in the United States. Marshal Mathers “Eminem” is the lead singer of the rap band.

Devil’s Night is the debut studio album by Detroit hip hop group D12. It was released on June 19, 2001 under Shady Records and Interscope Records. It was also the first album to be released on Shady Records

Platinum Record and Plaque along with RIAA insignia. Eminem record awards are rare AND VERY RARELY DO YOU SEE ONE PRESENTED TO Eminem himself!

Usually it is some record executive or radio station…but given to Marshal Mathers “Eminem” is unheard of.

The album was executive produced by Eminem, who had recently released his hugely successful third studio album, The Marshall Mathers LP, a year earlier. The album’s title comes from the Devil’s Night tradition, recognized in and around Detroit in which abandoned homes are set ablaze. This practice was so popular in Detroit that it was depicted in the film 8 Mile. The group recorded Devil’s Night in memory of Bugz, who was killed in May 1999 just hours prior to a concert.